(Natural News) When influenza “vaccines” were first introduced in 1980, the claim was that they would put an end to the flu. It has been more than 40 years since, however, and rates of infection and death are about the same as they were back in 1960.

The following image shows flu shot uptake between 1980 and today, as provided by the U.S. Centers for Disease Control and Prevention (CDC): 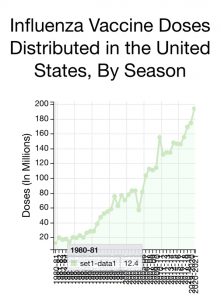 The next image shows monthly influenza mortality counts between 1959 and 2016: 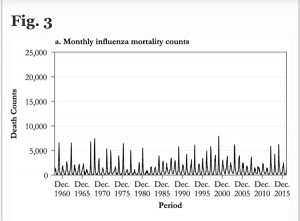 Notice anything wrong with what you see? Despite a massive rise in flu shot uptake over the past 40 years, the same number of people are dying every month from the flu, almost as if the shots are doing absolutely nothing to stop the virus.

“We went from 12 million flu shots in 1980 to almost 200 million in 2020,” writes Alex Berenson on his Substack, adding that nothing has changed as far as flu deaths during that time.

“There is absolutely no relationship between the number of flu ‘vaccines’ we give and deaths from influenza.”

It gets worse, though. What is not shown on the second chart are the number of flu deaths in 2017 and 2018. It turns out more people died from the flu during that season than perhaps ever, including during the 1968 Hong Kong flu outbreak.

The New York Times reported that 80,000 Americans of flu died during the winter of 2017-18, which it said was the “highest toll in years.”

“Among the dead were 180 babies, children and teenagers, more than in any year since the CDC began tracking pediatric deaths.”

What this all proves, of course, is that flu shots are just as useless as Wuhan coronavirus (Covid-19) “vaccines” at “saving lives.” Both injections are also dangerous and come with the risk of serious side effects, though covid injections seem to be far worse.

“Instead of asking if the reason people didn’t want to get jabbed was that the shots manifestly DID NOT WORK, the authorities simply looked for ways to encourage or force people to take them,” Berenson further explains.

“By 2010, research on ‘vaccine hesitancy’ and ‘compliance’ began to accelerate … This is what happens when process – taxpayer-funded process – gets separated from outcome, when too many people have too much money and careers at stake for anyone to ask the question: Does any of this make sense?”

The results of all that research were used to carefully craft and hone the plandemicand how to deal with resisters who refuse to get injected with experimental gene therapy chemicals, also known as mRNA (messenger RNA) “vaccines.”

“… when Covid came the vaccinators knew EXACTLY what to do,” Berenson contends. “Except this time the money made the funding for flu shots look like a rounding error. Getting out of this ditch is going to be very, very difficult.

These and other revelations are really starting to make waves in the court of public opinion. People who were once convinced that vaccines are “safe and effective” are now starting to question everything about the official narrative.

“COVID has helped me re-evaluate the entire ‘vaccine’ narrative, and for the first time in years, I did not get a flu shot this winter,” wrote someone who reads Berenson’s work, adding that she did not get the covid injections either.

“Now I feel guilty for past discussions with some of my children and a sibling about how they needed to get the flu shot. I believe that Robert Malone, in one of his interviews, stated that the flu shot is a lot more controversial among vaccine experts than anyone would ever know.”

More related news about flu shots can be found at ChemicalViolence.com.

Sources for this article include: