“We found other coronaviruses in bats, a whole host of them, some of them looked very similar to SARS. So we sequenced the spike protein: the protein that attaches to cells. Then we… Well, I didn’t do this work, but my colleagues in China did the work. You create pseudo particles, you insert the spike proteins from those viruses, see if they bind to human cells. At each step of this, you move closer and closer to this virus could really become pathogenic in people. You end up with a small number of viruses that really do look like killers.”

This statement was said by EcoHealth Alliance President Peter Daszak at a 2016 forum discussing “emerging infectious diseases and the next pandemic”. Daszak, who received more than $118 million in grants and contracts from federal agencies, including $53 million from USAID, $42 million from DOD, and $15 million from HHS, appeared to boast about the manipulation of “killer” SARS-like coronaviruses carried out by his “colleagues in China” at the now infamous Wuhan Institute of Virology.

According to investigative research done by independent-journalist Sam Husseini and The Intercept, much of the money awarded to EcoHealth Alliance did not focus on health or ecology, but rather on biowarfare, bioterrorism, and other dangerous uses of deadly pathogens.

EcoHealth Alliance received the majority of its funding from the United States Agency for International Development (USAID), a State Department subsidiary that serves as a frequent cover for the Central Intelligence Agency (CIA). Their second largest source of funding was from the Defense Threat Reduction Agency (DTRA), which is a branch of the Department of Defense (DOD) which states it is tasked to “counter and deter weapons of mass destruction and improvised threat networks.”

The United States Agency for International Development (USAID) has a long history of acting as a contract vehicle for various CIA covert activities. With an annual budget of over $27 billion and operations in over 100 countries, one former USAID director, John Gilligan, once admitted it was “infiltrated from top to bottom with CIA people.” Gilligan explained that “the idea was to plant operatives in every kind of activity we had overseas; government, volunteer, religious, every kind.”

In 2013, a US cable published by WikiLeaks outlined the U.S. strategy to undermine Venezuela’s government through USAID by “penetrating Chavez’s political base”, “dividing Chavismo”, and “isolating Chavez internationally.” In 2014, the Associated Press disclosed that USAID contracted out a project to develop a rival to Twitter in order to foment a rebellion in Cuba.

From 2009 to 2019, USAID partnered with EcoHealth Alliance on their PREDICT program which identified over 1,200 new viruses, including over 160 coronavirus strains; trained roughly 5,000 people around the world to identify new diseases; and improved or developed 60 research laboratories.

What better way for the CIA to collect intelligence on the world’s biological warfare capabilities? 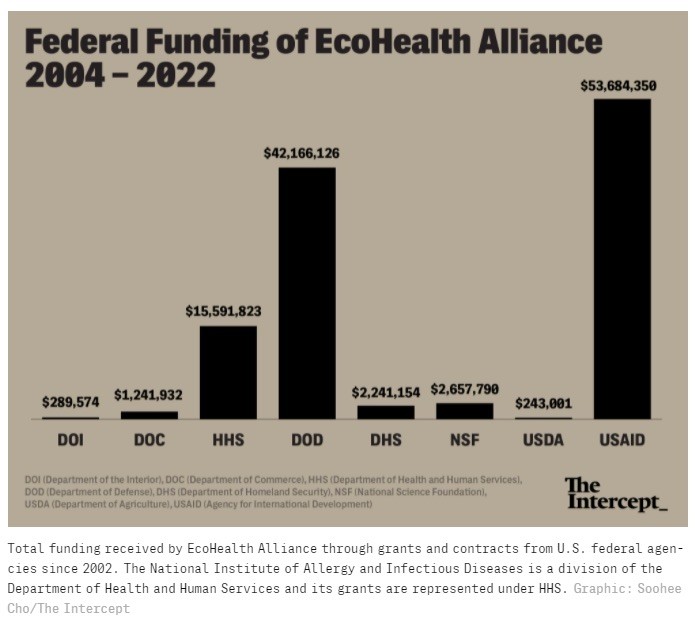 Dr. Andrew Huff received his Ph.D. in Environmental Health specializing in emerging diseases before becoming an Associate Vice President at EcoHealth Alliance, where he developed novel methods of bio-surveillance, data analytics, and visualization for disease detection.

On January 12, 2022, Dr. Andrew Huff issued a public statement (on Twitter) in which he claimed, Peter Daszak, the President of EcoHealth Alliance, told him that he was working for the CIA.

Dr. Huff continued, “…I wouldn’t be surprised if the CIA / IC community orchestrated the COVID coverup acting as an intermediary between Fauci, Collins, Daszak, Baric, and many others. At best, it was the biggest criminal conspiracy in US history by bureaucrats or political appointees.”

What exactly did they cover-up?

Peter Daszak’s EcoHealth Alliance—financed by USAID, DOD, and other U.S. Government agencies—partnered with Dr. Ralph Baric of the University of North Carolina and Dr. Shi Zhengli of the Wuhan Institute of Virology to conduct gain-of-function research on bat-borne coronaviruses.

Baric successfully created a “chimeric” coronavirus in 2015. There is a well-documented scientific paper trail that details how Dr. Baric and Dr. Zhengli continued to collaborate on gain-of-function research together to create what went on to be a potential precursor to the SARS-CoV-2 virus.

Dr. Anthony Fauci, Dr. Francis Collins, and Dr. Peter Daszak, who were proponents of this type of international collaboration on gain-of-function research were heavily incentivized to cover up the possibility of a lab origin because they previously had funneled U.S. taxpayer money to the Chinese lab.

At the start of 2020, there was a lot of chatter about where the virus SARS-CoV-2 actually originated from. Two papers published in March 2020—one in Nature Medicine and one in The Lancet—controlled the direction of the dialogue on the origin of the virus.

Both papers were repeatedly cited by Fauci, Collins, Daszak, the corporate media, and big tech as evidence to shut down and even censor any discussion of the possibility that the virus originated at the Wuhan Institute of Virology.

Only later through redacted emails released by FOIA did we learn that Fauci, Collins, and Daszak were intimately involved in crafting the two papers which dismissed the lab origin hypotheses as “conspiracy theory.”

In February 2020, Daszak told University of North Carolina coronavirus researcher Dr. Ralph Baric that they should not sign the statement condemning the lab-leak theory so that it seems more independent and credible. “You, me and him should not sign this statement, so it has some distance from us and therefore doesn’t work in a counterproductive way,” Daszak wrote.

More unredacted emails have revealed that while these scientists held the private belief that the lab release was the most likely scenario, they still worked to seed the natural origin narrative for the public through the papers published in Nature Medicine and The Lancet.

In April 2020, Daszak opposed the public release of Covid-19-related virus sequence data that has been gathered from China, as part of the U.S. Agency for International Development (USAID) PREDICT program because he said it would bring “very unwelcome attention” to the aforementioned “PREDICT and USAID” programs.

In September 2020, scientists were outraged when Daszak was chosen to lead the World Health Organization task force examining the possibility that Covid-19 leaked from the Wuhan Institute of Virology.

Despite many clear attempts to cut off a legitimate scientific inquiry into the Wuhan lab origin hypothesis, the theory continued to persist predominantly due to the fact that the Chinese government was unable to provide a single shred of evidence in support of the natural origin theory.

In May 2021, the narrative turned when, Nicholas Wade, a former science reporter at the New York Times published his seminal column outlining the case for the Covid lab-leak theory.

For SARS1, an intermediary host species was identified within four months of the epidemic’s outbreak and the host of MERS was identified within nine months. Yet some 15 months after the SARS2 outbreak began, and a presumably intensive search, Chinese researchers had failed to find either the original bat population, or the intermediate species to which SARS2 might have jumped, or any serological evidence of a natural origin.

Every step of the way, Fauci, Collins, and Daszak have done everything in their power to obfuscate, mislead, and misinform the world about the possibility of SARS-CoV-2 originating at the Wuhan Institute of Virology.

If Dr. Andrew Huff is telling the truth, Fauci, Collins, and Daszak are not covering up the lab origin only for themselves, but also for the Central Intelligence Agency, the Department of Defense, and the U.S. Government.

UChicago Must End Its Booster Mandate—We Are Not Lab Rats: The Editorial Board of The Chicago Thinker publishes an immaculately sourced scientific takedown of booster mandates for university students. We will not play pretend— COVID is not the plague, the vaccine is still experimental, and the risk of myocarditis and menstrual cycle issues is very real for young people. Read more.